Orvis Down The Hatch 2015 Event Report

Mornin' Folks,
Well, it was that time of year again.  Time for Tom Rosenbauer and Pete Kutzer to make the long journey south to Atlanta for the Orvis Down the Hatch Fly Fishing Film Festival.  You may remember from my article last year (which you can read here), that Tom Rosenbauer (Marketing Director for Orvis Rod and Tackle and voice of the Orvis Fly Fishing Guide Podcast) spent some time in the Orvis Atlanta store meeting folks, giving advice and then giving his Small Stream presentation.  This year was done a bit differently in that Tom did a meet and greet in the store, discussing all things fishing with his adoring fans, and he brought along Orvis' casting maestro, Pete Kutzer.  Tom is an incredibly nice guy, he greets everyone in the store with a hearty hand shake and a warm smile that makes you think he's known you for years.  This year was my first time meeting Pete and he gives Tom a run for his money in the warm welcome department.  I didn't stay terribly long with Tom and Pete, I wanted to make sure and give others a chance to meet them.  But we did talk about the small stream, Georgia native Brook Trout that I have come to love, and, of course, bluegill, as always.  Tom and Pete both have an open invitation to fish the north Georgia small streams, cold or warm, with me, anytime!
We left the Orvis Atlanta store and had to kill a few hours before the show started (which is harder than you might think in Atlanta!).  The Little Girl and I strolled around some of the shops at Atlantic Station and grabbed a pizza for lunch.  This year the Down the Hatch festival was held at a different venue, Center Stage Atlanta, which was right on the other side of I-85 from Atlantic Station, making it, in my opinion, much more convenient and easier to get to than last year's venue.  The theatre room at Center Stage accommodated a much larger crowd than the previous location as well.
After a one hour social with beer provided by Sweet Water Brewing and some heavy hors-d'oeuvres we were let into the main theatre to get the show started.  Tom and Pete opened the show with a few words and a quick story then introduced Chattahoochee River Keeper Jason Ulreth to speak about the Chattahoochee River that runs through Atlanta, how lucky we are to have one of a very few trout fisheries that runs through a major metro area and to explain that the proceeds from the show will go to fund two water testing sites on the river for the next year. 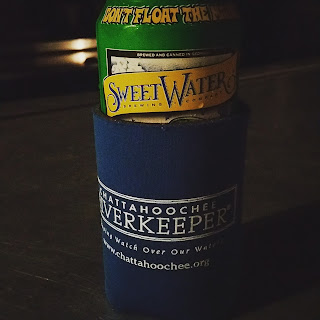 T-shirts, hats, koozies, and other items were thrown to a waiting crowd just before the lights were dimmed and the films started.  You really owe it to yourself to get to a fly fishing film festival if you ever get the chance.  The cinematography really is incredible.  The films always take place in incredibly beautiful locales, have stunning fish and action and, quite often, have a good bit of comedy that might be a little too insider if you're not a fisherman or, at least, married to one.
During the shows intermission Tom and Pete called raffle numbers.  There was an impressive list of generous raffle prizes this year: half and full day guided trips for one or two, Costa and Smith Optics sunglasses, water purifiers, coolers, coats and, of course, the one that everybody wanted, the Orvis Helios 2 Sweet Water Brewery 9'-0" 5 weight fly rod, which I should have won, but didn't! 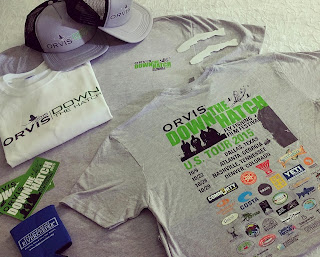 Every one was very happy with the evening, and the folks that won the raffles were ecstatic.  Many, many thanks go to the folks at Orvis, Orvis Atlanta, Orvis Alpharetta, Sweet Water Brewery, Center Stage Atlanta and all of the donors and sponsors for another awesome night of beer and fly fishing films.  I hope to see you all there again next year!
Have a great day, Tight Lines and cold beer!!
-Nick

Posted by The Suburban Angler at 11:29 AM