Evenin' Folks,
Well, I'm finally all moved in to my new apartment and I'm a week into the new semester at school, so I wanted to take the time to get another post up here.  It's been too long!  Unfortunately, I've been so busy lately that I really haven't been getting a whole lot of fishing done.  I did go fishing shortly after my last full blog (Skunked.....again!), and actually did quite well.  I went fishing for a few hours this past Sunday morning, as well, and did ok, but had some tackle issues (see A few quick fish pics).  For tonight's post, I thought I'd try something a little different.  I'm going to attempt to do a product review, fingers crossed! 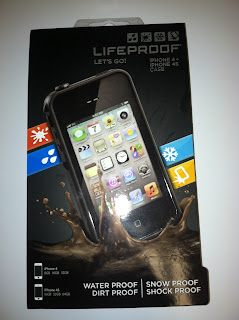 I try to have a lot of pictures on my blog, but all I've got to take the pictures with is my iPhone.  After my soggy canoe trip with my anonymous friend, I've been pretty nervous about having my phone around water.  I've already had to replace a broken screen on it, I sure don't want it to drown!  So, once I got the kayak, I started keeping my phone in zip top sandwich bags.  They work well at keeping the phone dry and they are very inexpensive (and I'm cheap!), but my pictures didn't turn out too well when I tried to shoot through the bag.  So that meant removing the phone from the bag and exposing it to wet hands and slippery fish and a very large lake every time I wanted to photograph a catch.  Not to mention the poor fish dangling from the line while I was futzing with the phone!  I started looking around and doing a bit of research on waterproof cell phone cases.  I liked my plastic faux-woodgrain case, but it had already proven to do nothing for protection.  It seemed the waterproof phone cases rain the gamut from what was basically a fancy, overpriced zip top bag for around $30 all they way up to $200 high end camera box looking cases.  I knew that I'd have to spend more than the cost of a sandwich bag, but I didn't really want to get into grocery-money-for-the-month territory.  While at work one day, I was listening to Rob Snowhite's Flyfishing Consultant podcast from IFTD 2013 and he mentioned the Lifeproof brand cases and how much he liked his.  I looked them up, read some reviews, and started hunting for a bargain (I do hate paying full retail for anything!).  I know ebay can be a crap shoot when it comes to a real item versus a knockoff, but I took a chance and got a genuine Lifeproof case for about half of the MSRP.
I got the case in the mail and immediately popped my phone into it.   The plastic seems of good quality, it doesn't have that cheap, flimsy feel that some things can have.  It seemed to fit together well and fit the phone equally as well.  I was impressed that Lifeproof included a microfiber cleaning cloth, a waterproof headphone jack adapter and a spare headphone jack plug with the case.  Everything is sealed with silicon o-rings and it seems to be a diaphragm-type system for sealing the speaker holes.  Sound quality through the case is excellent, you really can't tell a difference between call quality with the case on or off.  Listening to music or a podcast without the headphones does have a little bit distant sound, but nothing that would put me off.
One of the points that Lifeproof advertises for this case is that it doesn't add much to the bulk of the phone.  According to the packing, the case adds only 1.5mm to the width of the phone.  And, the plastic is such that it slides easily in and out of a pocket, making the slight additional size even less noticeable.   Even the buttons on the sides of the phone still seem to work without much additional effort, but the slide to mute the phone is a little more difficult to operate.
I had seen online during my research that there is an available charger extension adapter.  Without doing any investigating, I took that to mean that the phone couldn't be charged with just the OEM charger without removing the case.  I was, luckily, mistaken.  When the waterproof door is flipped open on the bottom of the case, there is plenty of room for the original Apple charger.  No adapter is necessary.
When I first started using the case, I was disappointed in the film like cover over the screen.  It doesn't seem to sit down flat on top of the phone screen, but, instead, tends to be slightly raised above it.  I do, occasionally have to repress an icon on the phone because I didn't make good contact, but now that I've grown accustomed to it, I hardly even notice anymore.
Over the camera lens of the phone Lifeproof used an optically clear glass lens in these cases.  With the photos I've taken so far, I can't tell any difference between pictures taken with the case and without.
All in all, I am very satisfied with the Lifeproof case.  It does seem to offer a higher level of protection than most other cases on the market.  And, it really doesn't look bad in the process.  I've also recently found self adhesive "skins" for the Lifeproof cases, so I'll have my faux-woodgrain look back soon enough!
There's just one more thing before I wrap up this review.  If I'm going to continue to use my phone to take pictures while fishing and kayaking, I had to know if the case was truly waterproof.  According to Lifeproof, the case will protect the phone during submersion up to 6 feet deep for up to an hour.  I don't have the proper equipment to do a very scientific test of that claim, however, I do have a large mixing bowl full of water!  I'll let the following photos tell the rest of the story.
I'm glad I purchased the Lifeproof case and would definitely recommend it to anyone who might also use their phone for fish pictures.  Like the old saying, an ounce of prevention is worth a pound of cure.  If you don't want to spend a few hundred dollars replacing your phone, it might not hurt to spend the $80 to get a good, quality phone case that will protect it.
Thanks for reading my first product review, and as always, Tight Lines and Happy Fishing!
-Nick

Posted by The Suburban Angler at 11:58 PM No comments:

Mornin' Folks,
I finally got out and did a little fishing for a few hours yesterday. Moving into the new apartment and starting back to school ate up all my fishing time over the last few weeks. I took the kayak to Lanier Park on Lake Lanier again. I got a lot of good bites, but seemed to have a lot of tackle issues. The three in the following pictures are all I got to the boat. This is just a quick post to let everyone know I haven't forgotten about the blog, I've just been awfully busy. I've got a full write-up in the works that I'll have posted this week, plus my Lifeproof phone case review and a few other things. So keep checking back and/or follow on social media.
Tight lines and happy fishing!
Nick 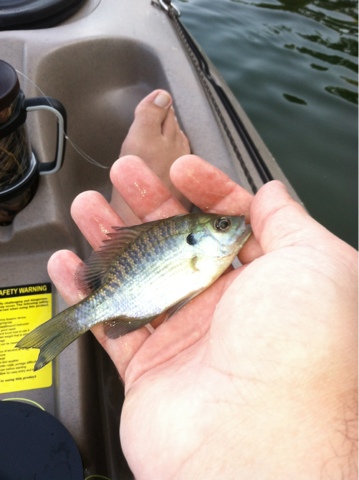 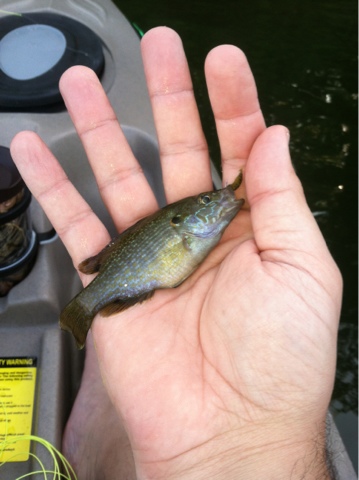 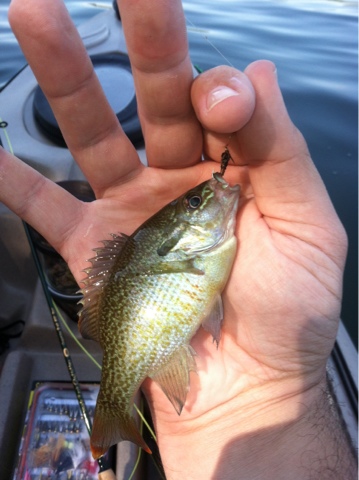 Posted by The Suburban Angler at 7:43 AM No comments: