My Favorite Accessories from IFTD and ICAST 2015

Mornin' Folks,
Here's the third installment of my favorite products from IFTD and ICAST this year.  This post contains, what I consider, some of the best new accessory products and companies in fly fishing for the coming season.  Keep in mind that these are in no particular order whatsoever and I've included links to each company's website.
Tight lines,
Nick 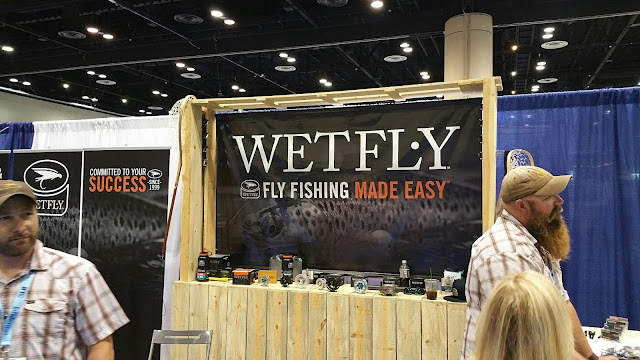 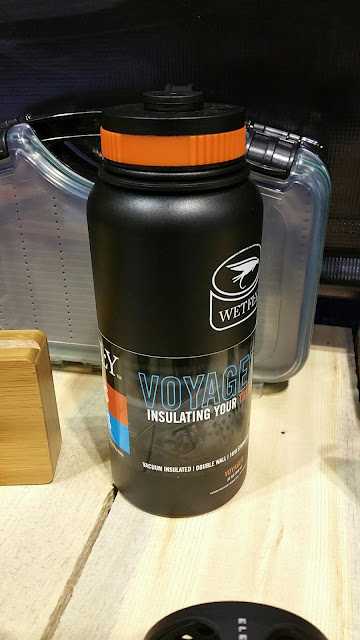 This is WetFly's Voyager insulated bottle.  On the first day of the show the guys loaded this bottle up with ice.  On Friday, there was still ice in the bottle!  My current water bottle doesn't do that, and it would sure be nice to have cold water while spending the day fishing. 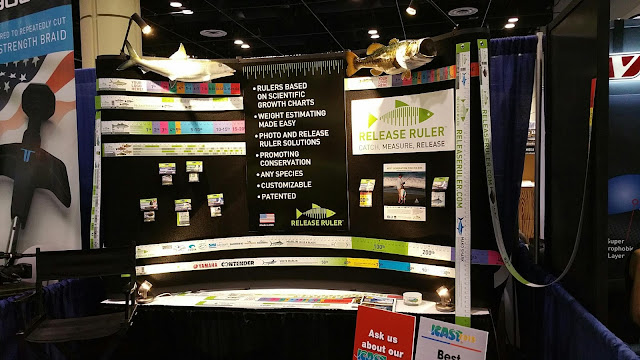 The folks at Release Ruler have taken decades worth of fish size data, threw some math at it and came up with a ruler that, based on that statistical analysis, will give an approximate weight of your catch based on it's length.  The rulers are species specific, but they have them available for seemingly everything from largemouth bass up to mako shark! 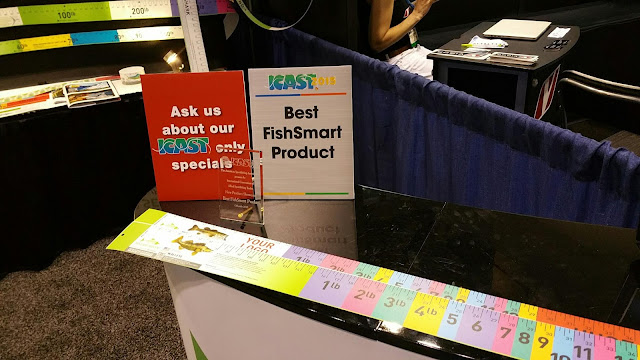 The Release Ruler also won Best FishSmart Product in the ICAST New Product Showcase, which proves that I'm not the only one that thinks this is a great idea! 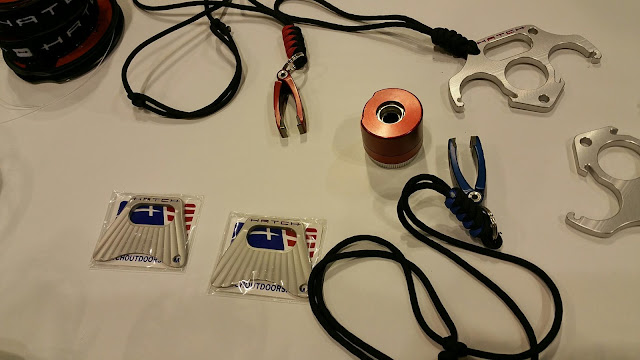 The Hatch Outdoors folks had a few cool tools on display, including their IFTD Best of Show Accessory, The Hatch Nipper.  The size and heft of these nippers really felt good and secure in the hand.  The Fish Tail bottle opener looks like a waterside necessity, too! 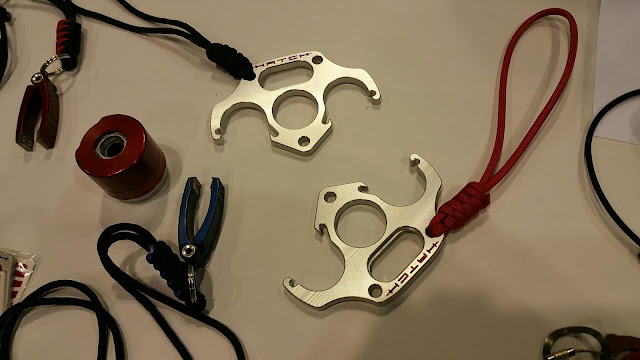 Here's a beautifully machined knot tightener.  Used to tighten the knots on heavy
saltwater line, it's a tool I didn't even know existed! 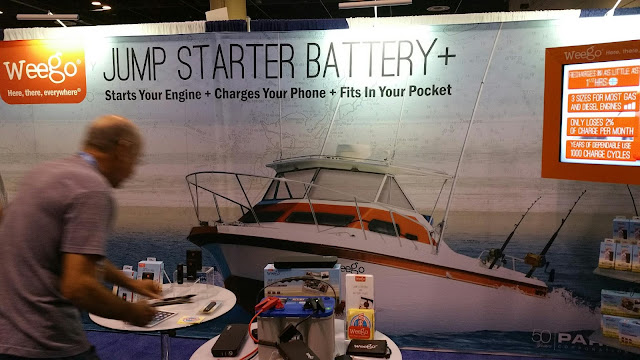 I'm a big fan of the "get your ass home" products.  After a day of bluelining a dead battery in the truck is one of my worst fears. 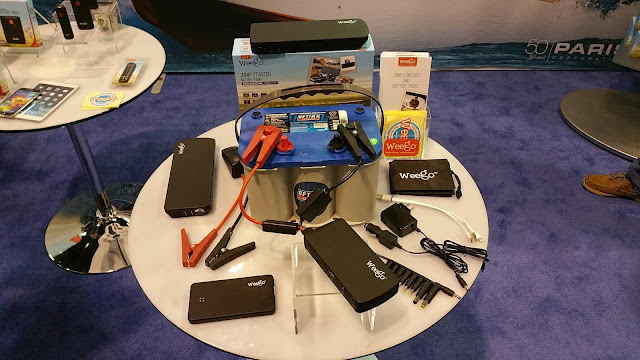 The folks in the Weego booth told me that the larger battery could jump start my truck 6-8 times on a single charge, charge my cell phone or laptop and do all that after sitting in the glove box for a year! 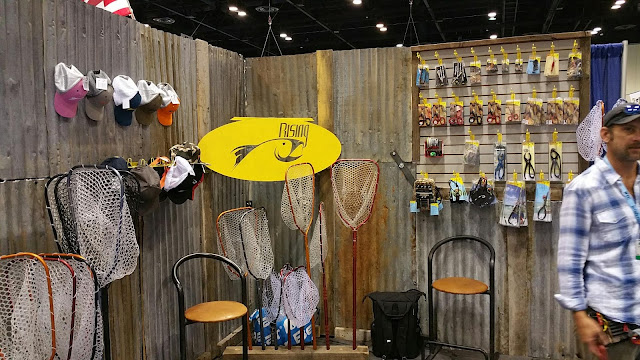 Determined to make your fly fishing life easier, with a strong made in America showing, Rising has everything from the aluminum Lunker and Brookie nets to multiple pliers and nippers to the Flask and Shot minimalist packs.  Since fly fishing tends to be more of a lifestyle than a hobby, they even make a grilling multi-tool called the PopsQTool!
Cigars in a Pouch 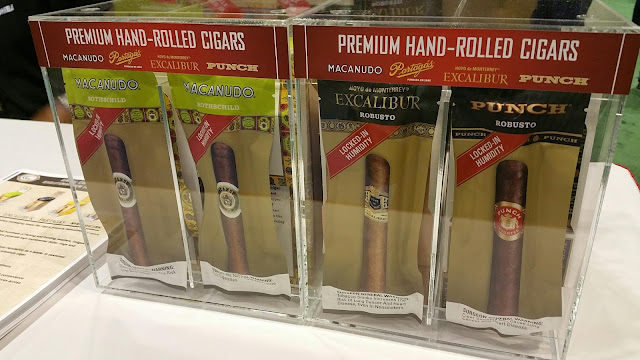 I would consider a good cigar a fly fishing accessory, especially one packed in a pouch that maintains freshness for up to three years! 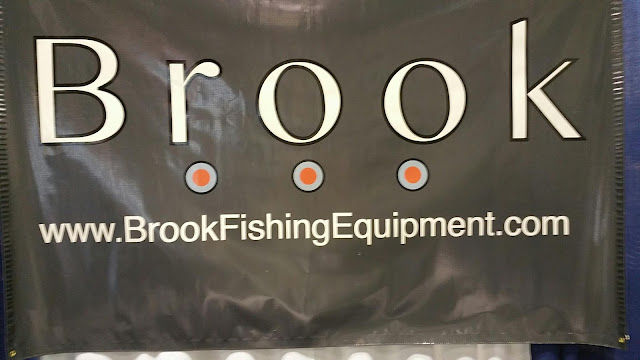 I got to hang out for a little while with a couple of really nice guys from Brook Fishing Equipment. 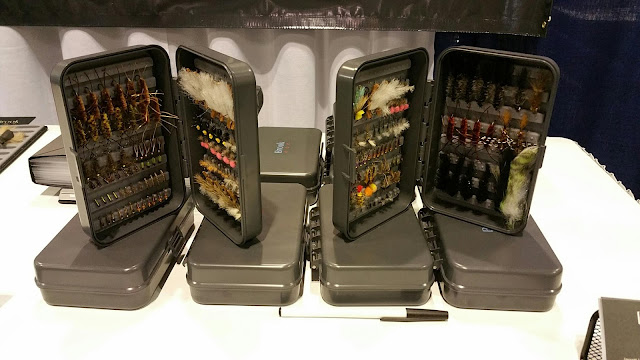 American made, silicon insert fly boxes. They even float! 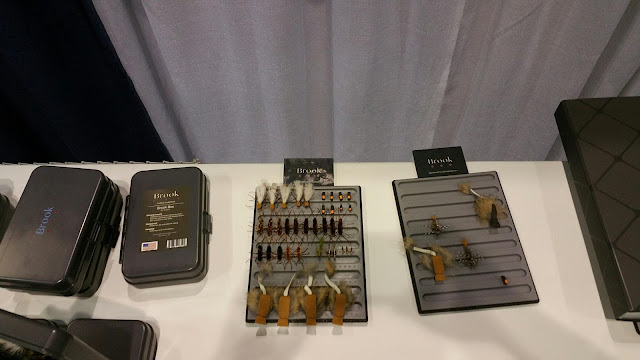 Brook Fishing Equipment already has a pretty good range of sizes and styles for their fly boxes.  The Outta The Box patch would be great for the tying bench or drift boat, too! 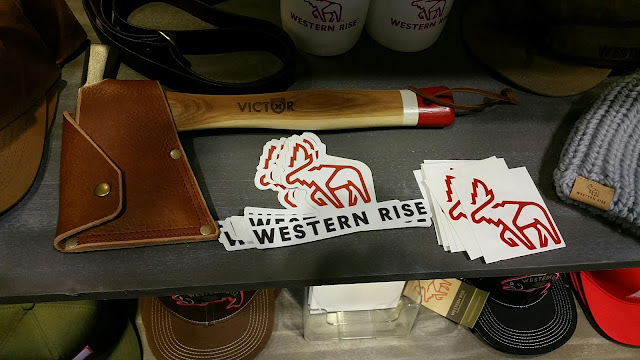 I've already mentioned Western Rise in the My Favorite Softgoods post, but they really have some great accessories as well.  Like this hatchet that's a collaboration with Victor Axe and Tool. 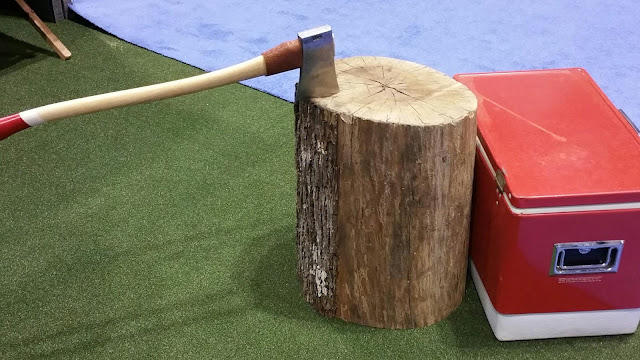 If a full axe is more your thing, they've got you covered there, too! 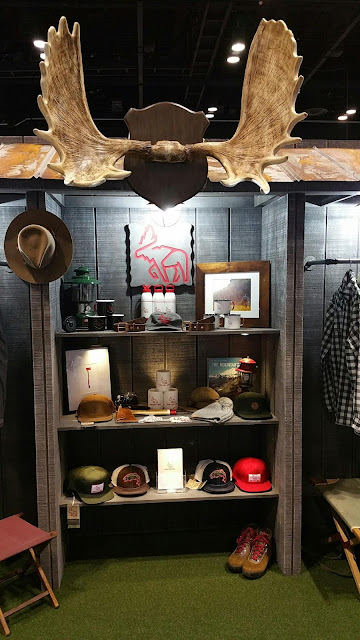 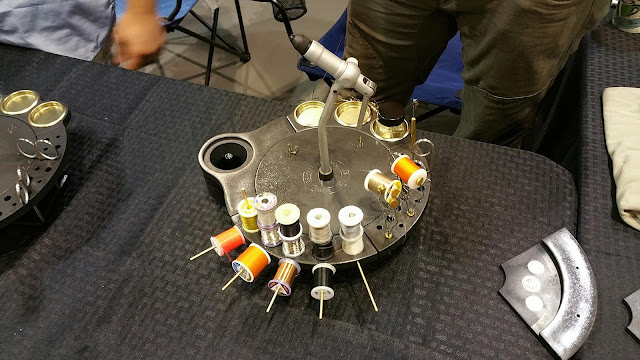 Here's a cool item that was introduced at IFTD, the TyWheel is a magnetic, modular fly tying station that attaches to your fly vise. 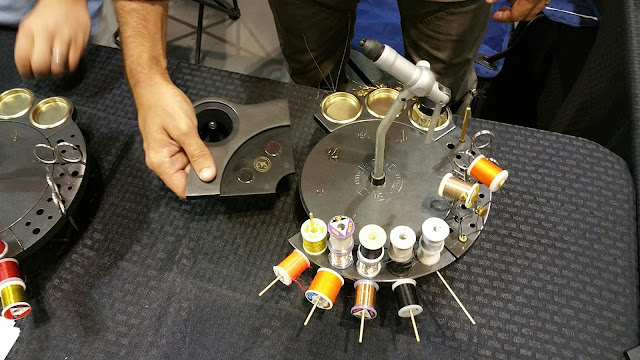 The pieces hold on securely with magnets (with the side benefit of keeping your hooks in check) and can easily be swapped based on the configuration needed for the fly you're tying. 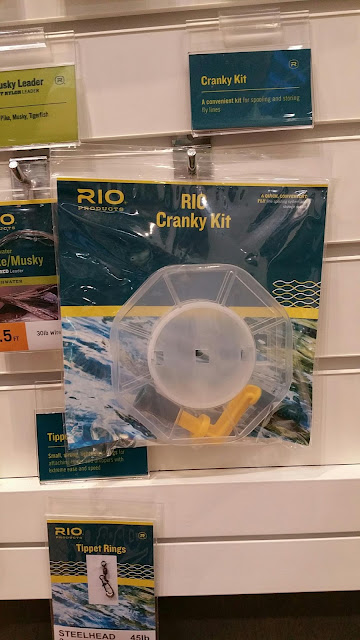 RIO had their new Cranky Kit on display.  Basically it's an empty line spool with a removable crank handle so you can strip line off your reel and back onto a spool for storage or to swap line on the same reel.  This would definitely be easier than trying to do it by hand! 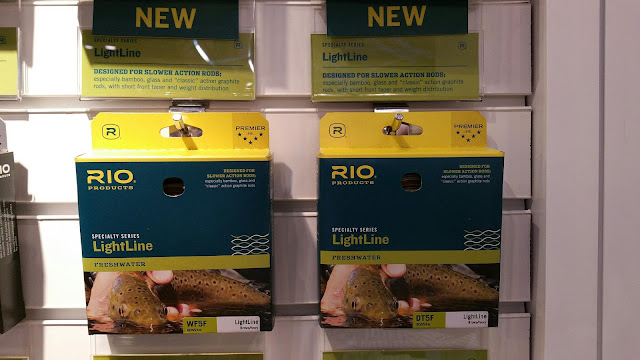 RIO also introduced the new LightLine series of fly lines.  Designed to get the best performance out of fiberglass, bamboo and vintage action fly rods.  Available in Weight Forward and Double Taper from 2-6 weight.

This was a long awaited item for me, the Tacky Big Bug Box!  I like to think I had a hand in this one when I asked the guys to make a box tall enough to house my bluegill poppers.  They delivered here, room for 72 large flies with a taller profile than the original box and a sculpted silicon mat to ease fly insertion.  Look for a review on TheSuburbanAngler.com soon and, in the mean time, check out my review of the original Tacky Fly Box. 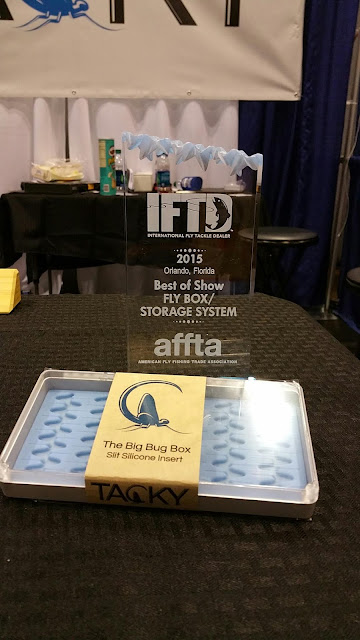 Huge congrats to the Tackiest guys in fly fishing for their Best of Show Fly Box/Storage System win at IFTD 2015!
PostFly 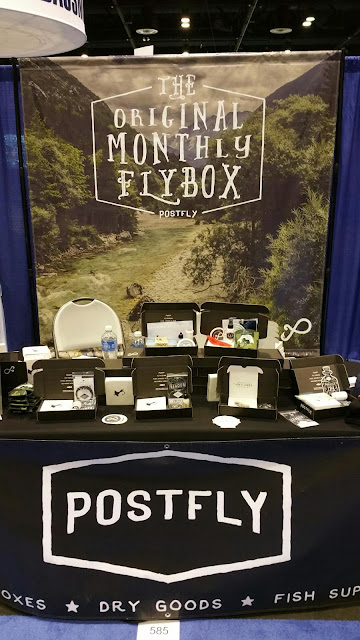 I don't know about you, but I love getting fly fishing gear in the mail.  A subscription to PostFly Monthly Fly Box will ensure that you get a selection of quality, trout, bass or saltwater flies delivered to your door every month.  If that's not enough for you, you can add leader, tippet, fly line, fly dressing, t-shirts, a Tacky Fly Box, or even a Taylor reel!  And, the longer the period you sign up for, the bigger the discount you'll get!  I need to see if I can talk them into a Bluegill box...
Orion Coolers 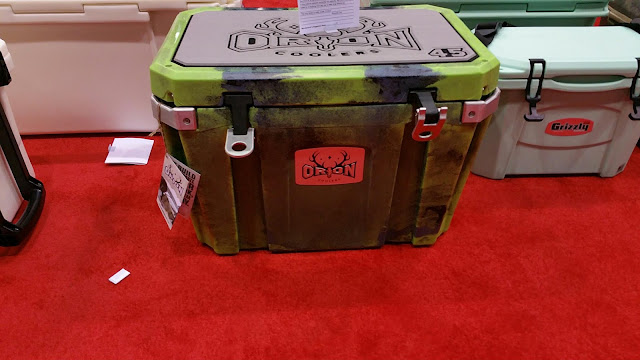 Orion Coolers are probably the most thoughtful coolers I have ever seen.  It's awesome enough that this high end cooler is made by the same folks that make Jackson Kayaks and that they're made right in Sparta, Tennessee, but the standard accessories on this one really made it stand out to me.  The first thing that caught my eye was the removable Princeton Tec flashlight that's molded into the removable tray.  Looking closer, the standing pad on the lid is included as well as the YakAttak/RAM Mounts accessory tracks, tie down points, bottle openers and, one of the best parts in my opinion, Orion Coolers are certified bear proof by the IGBC!
ARC Fishing 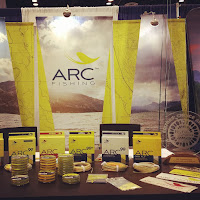 The ARC Fishing guys were on hand to introduce their New for 2016 ARC Dry Fly and ARC 99 Salt Coldwater lines.  Both lines feature the low-stretch Response Core, permanent PTFE coating for slickness and float, welded front and back loops and line ID system, as well as features specific to the lines intended conditions.  A big congratulations goes to them as well for winning a 2015 Fly Fish America Editor's Choice Award for the ARC Flourocoat Tippet!
Posted by The Suburban Angler at 6:56 AM